In 1983 at the height of digital recording craze, Philips issued a digital recording of Norwegian composer Edvard Grieg’s Peer Gynt incidental music to the 1867 play by the composer’s countryman, Henrik Ibsen. Philips had also started marketing its first-generation CD100 CD player the same year. Two elements of this recording stood out instantly at [...] 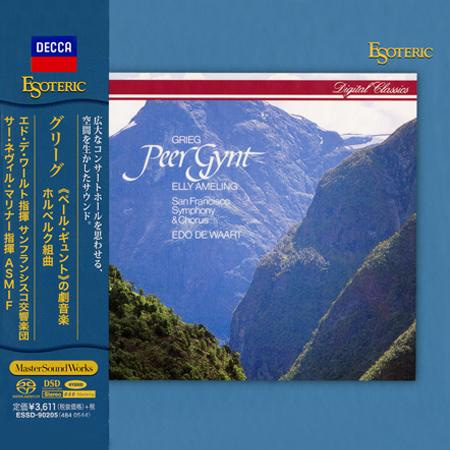 In 1983 at the height of digital recording craze, Philips issued a digital recording of Norwegian composer Edvard Grieg’s Peer Gynt incidental music to the 1867 play by the composer’s countryman, Henrik Ibsen. Philips had also started marketing its first-generation CD100 CD player the same year. Two elements of this recording stood out instantly at the time of its release.

The recording was notable for its very unique billing of “excerpts” and not of a choice of either of the two official suites penned by the composer himself. A complete recording of Opus 23 would contain 26 movements and 90 minutes of music, but Grieg later grouped it into two Suites, namely the Suite No. 1, Op. 46 and Suite No. 2, Op. 55, each containing 4 movements. The very popular melodies of “In the hall of the mountain king” and “Prelude to Act IV (Morning Mood)” are well known far and wide and are in Suite No. 1.

Here the San Francisco Symphony circa 1983, rather obscure on the international scene and having freshly settled into the spanking new home of the Davies Symphony Hall three years prior, embarked upon a journey under the baton of a very young Edo de Waart in his forties that unbeknownst to both would culminate in a classic of ages. Instead of using the Suites, de Waart decided to use both Suites and then add:

Albeit that the SFS’s performance of the whole recording is spirited and yet measured, “Prelude to Act I,” the opener to the whole disc is a particular treat for it is a rarity to be included. Hearing it, one questions how music so delightful could be omitted in the Suites and will proceed to cherish the experience. On its heel is “Prelude to Act II,” a piece using the same motif but taking on a deeper, more focused sensibility. No other orchestra played it as caringly and urgently as the SFS in recent memory. This music takes me to another place consistently, a place ancient, undisturbed and full of light.

“In the hall of the mountain king” is the showpiece here, and it might as well be the standard for all to be judged. The San Francisco Chorus, founded in 1972 and already brandishing its might, is completely alluring and convincing. But it is the caliber of the recording that provided a superior separation of the beautiful chorus from the orchestra, yet symbiotically integrated into a vast whole. I have not heard anyone else doing it more beautifully and proficiently than the SFS and SFC.

“Prelude to Act IV (Morning Mood)” is rendered with beauty of sound and flowing momentum. Not being an audiophile, de Waart brought out the double bass audiophile labels would die for. Readers with large and powerful woofers take note. The bottom-end in this music is not the rumbling nonsensical mess in some music; instead, the double bass burrows deep into our spine of its musical message via subtle and surefooted messaging. One just can’t help but keep playing the track over and over just to experience that beautiful rendition.

Readers in search of epical performance of soprano, chorus and orchestra need go no further than “Arabian Dance.” In sound and performance, this piece is only next to the “Christmas Song” in the LIM K2 HD Proprius Cantate Domino CD. Play it loud and be in awe.

The rest of the Peer Gynt selections is musically relevant and sonically resplendent. The original LP was played to death and I am now on the second one. The Esoteric SACD is semi-divine. Long has there not been a Peer Gynt played with more care and intensity since this release, and after. We haven’t had many Peer Gynt suites performances that comprise the seminal segments contained in this “excerpt” recording. San Francisco and Chorus had not sounded better until the Michael Tilson Thomas era of post-1995 with the new house-label SACD recordings.

Kudos to Esoteric for the remastering and reissuance of this recording!

If this is all the music in this reissue, it’d worth the money many times over. But Esoteric saw to it that a noted recording of another of the composer’s suites, the Holberg Suite, would serve as filler. And the music is performed by none other than the St. Martin in the Fields under Neville Marriner (he was not a Sir yet). As it is, this SACD is worth having.